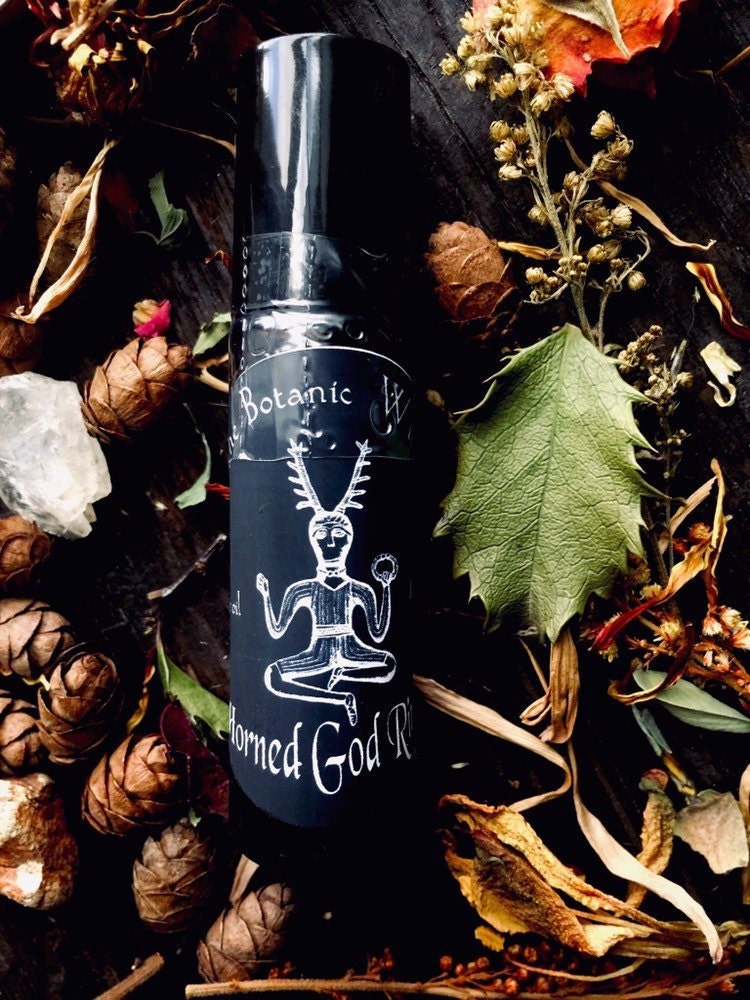 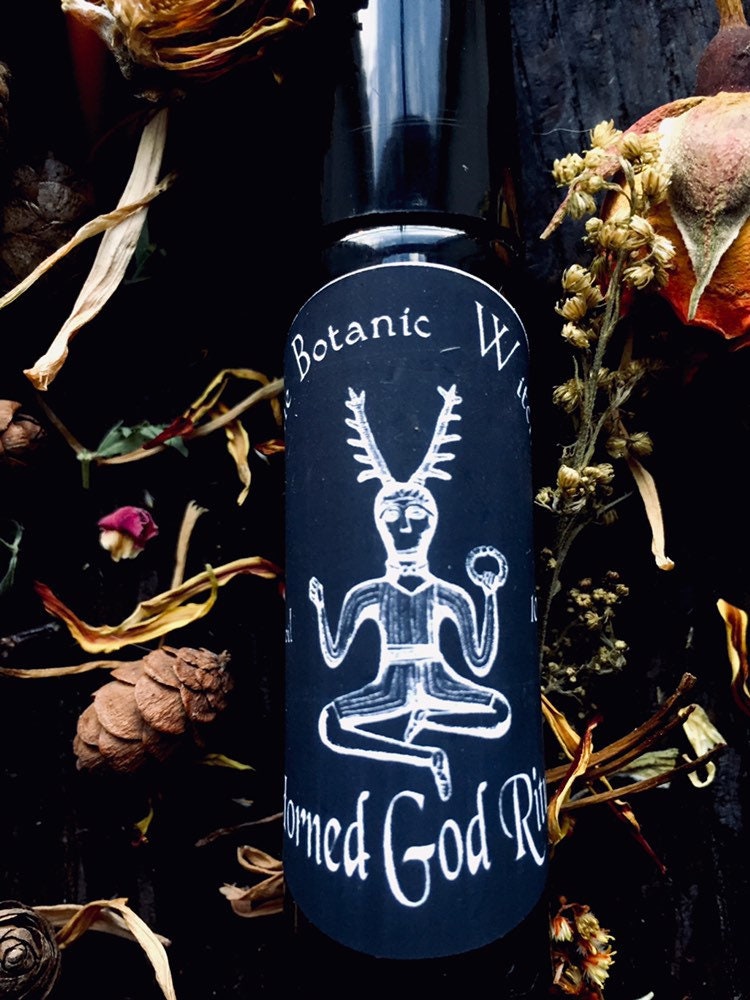 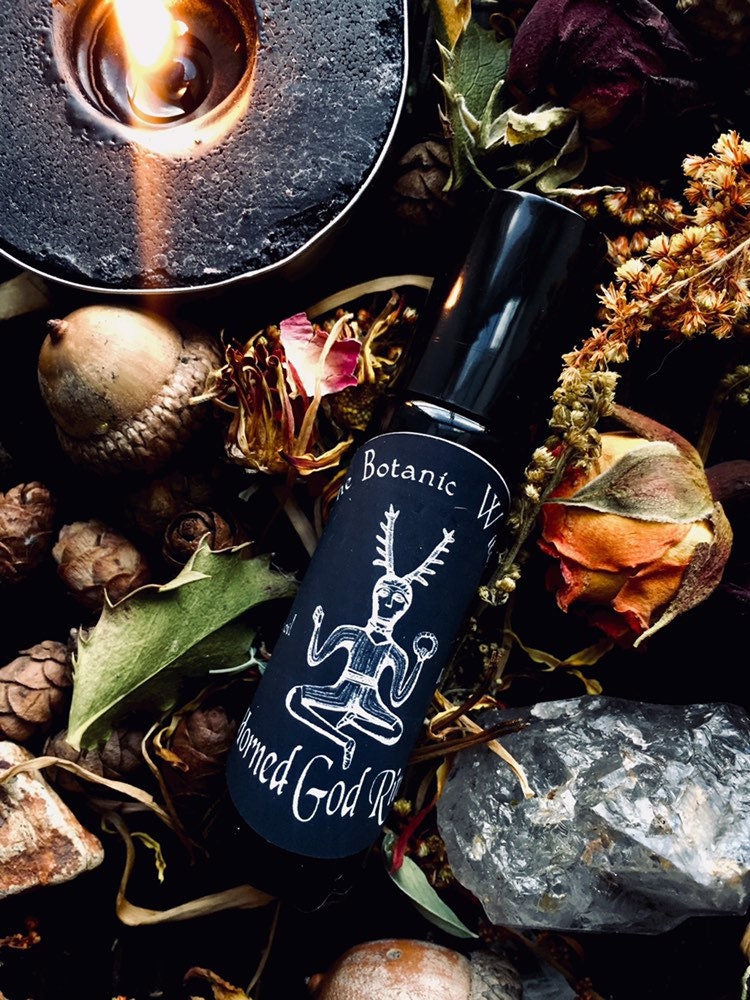 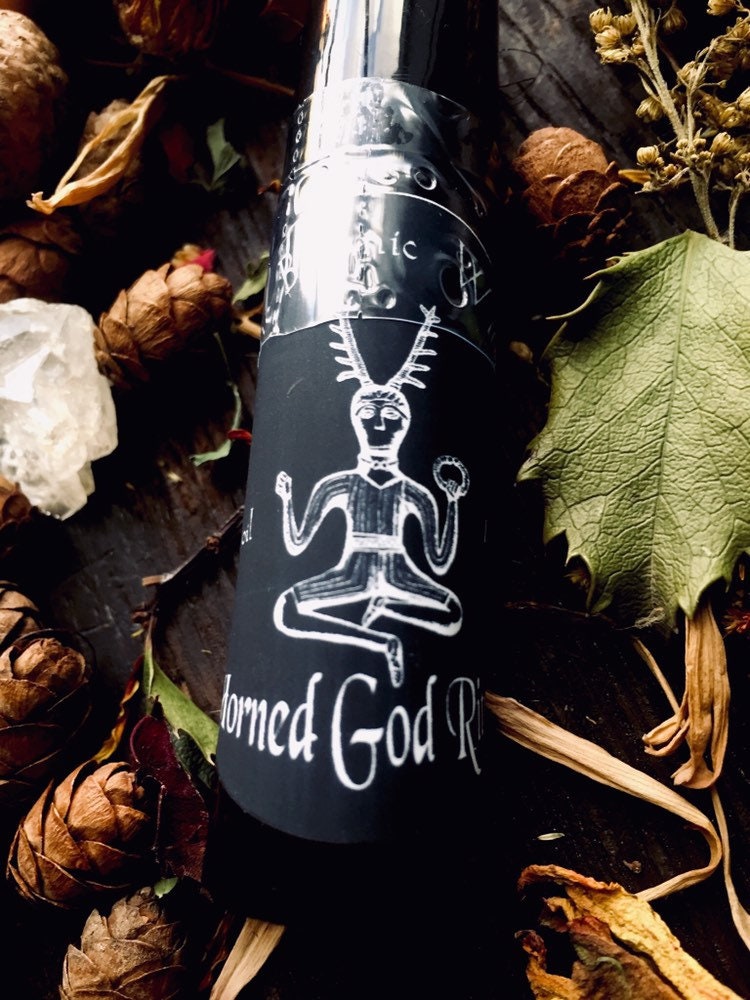 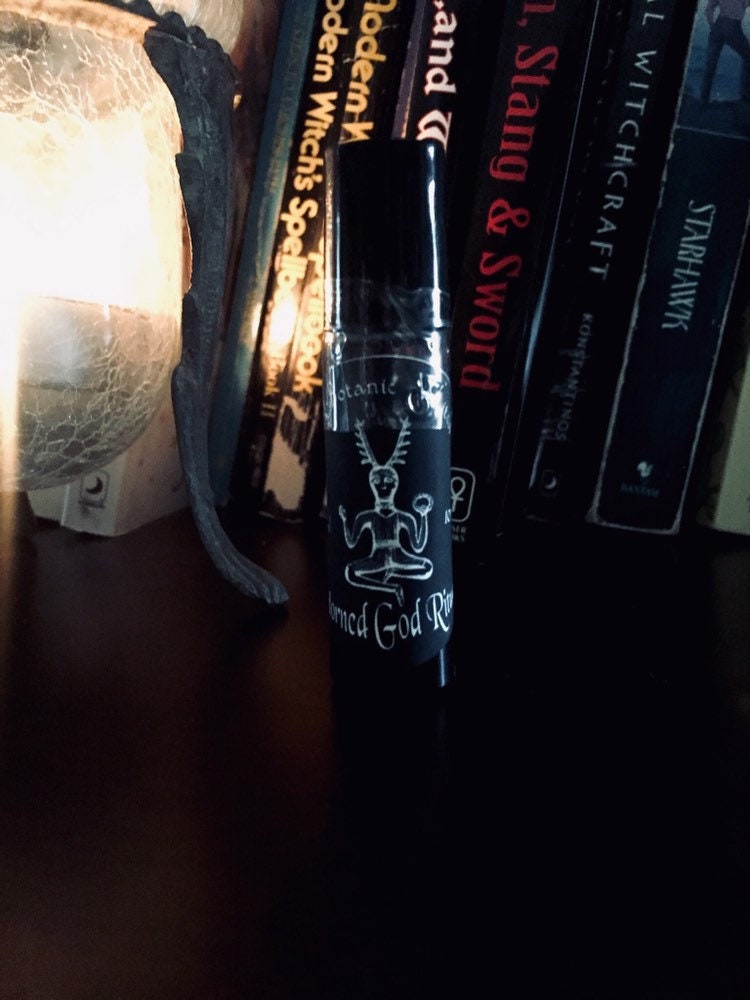 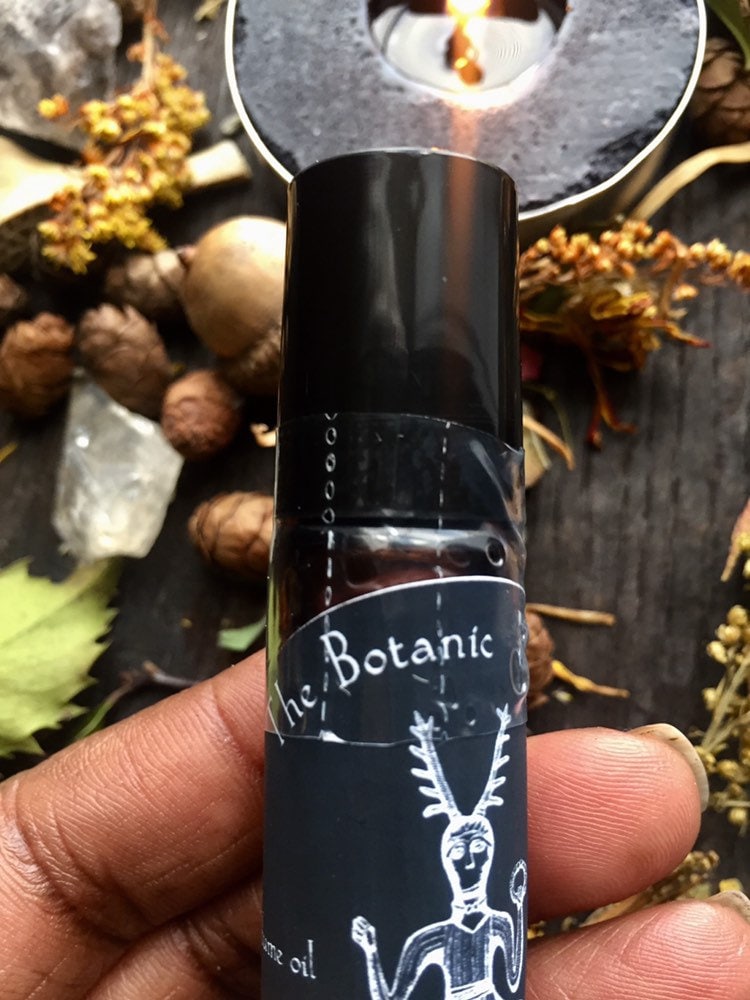 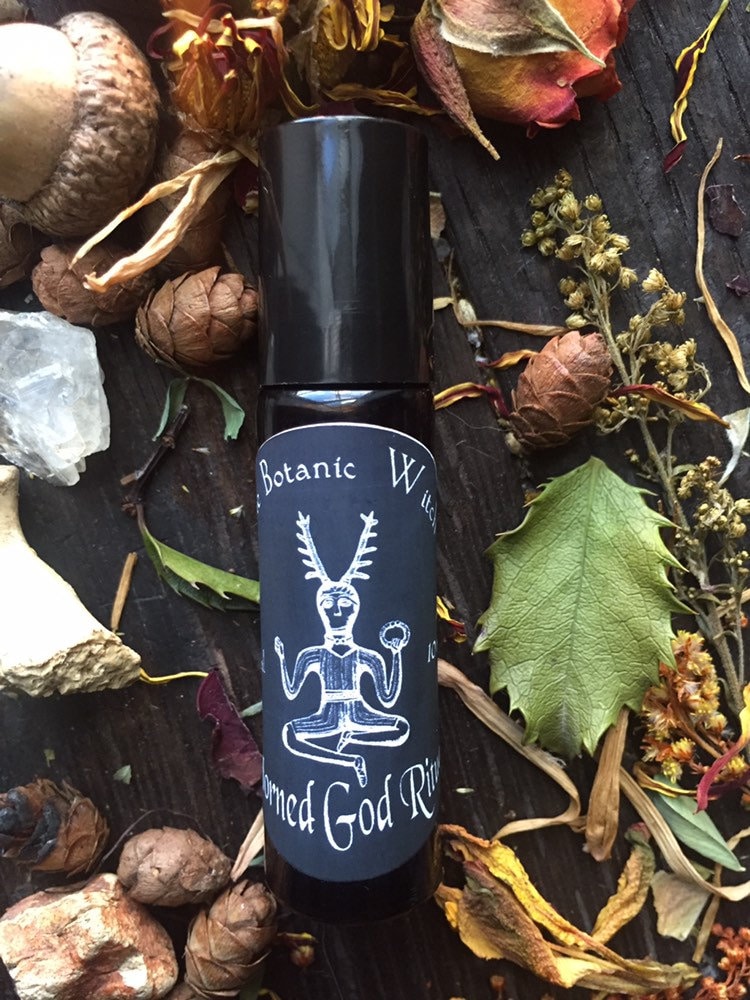 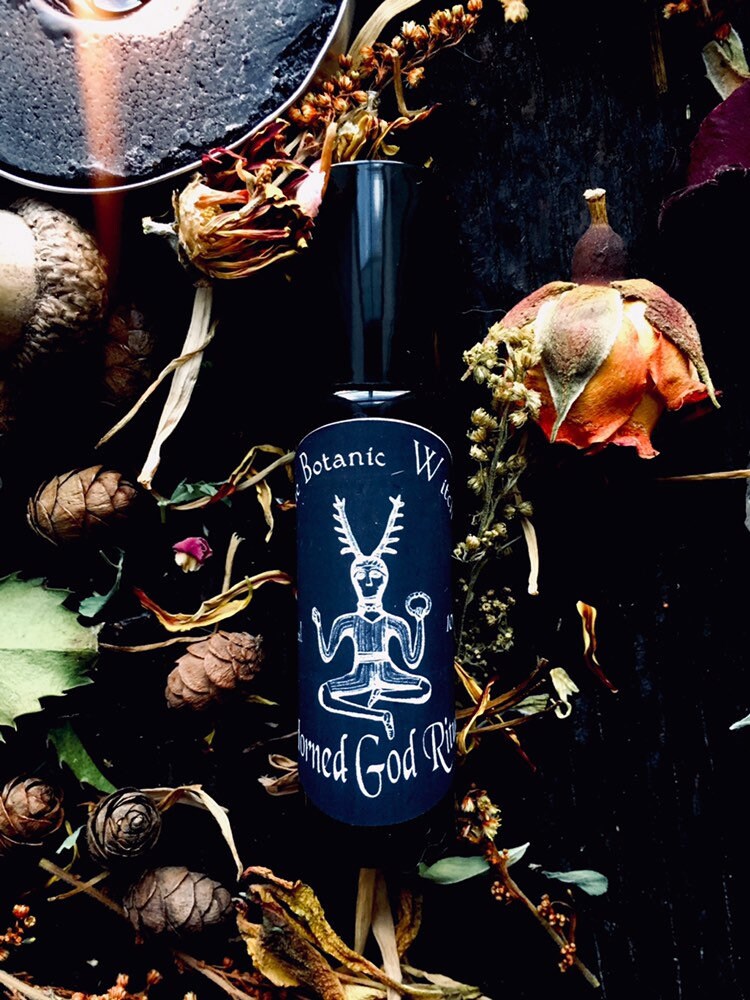 Horned God Ritual oil is based on an old recipe. It is a dark blend of Earth and Wood oils and resins that are traditionally associated with Horned Gods such as Pine, Benzoin and Oak Moss, and my greatest intent to aid in the honor and invocation of these Gods no matter your path.
Horned Gods are associated with power, virility, and the hunt

The horned god symbol has roots in Europe. It dates back to Paleolithic times. One of the first sightings was on a cave wall in France from around 13,000 BC. The image is called the Sorcerer and it is believed to depict the Great Spirit or Master of Animals.

Many paths have their version of a horned deity.

In Celtic Paganism, the god Cernunnos is depicted with horns. He was the god of fertility, the underworld, animals, life, and wealth.

In Egyptian Spirituality, Osiris is the horned god of the afterlife, the underworld, and rebirth.

In Hellenism Dionysus is the god of wine, winemaking, grape cultivation, fertility, ritual madness, theater, and religious ecstasy. Pan is the god of shepherds and hunters, and of the meadows and forests of the mountain wilds.

In traditional Cornish Witchcraft the Bucca Gwiddyn is called the light Bucca or life bringer. He is responsible for regeneration and birth. He is active during the spring months, summer months and part of fall up until what we know as Samhain.

From Samhain through the winter months the black Bucca or Bucca Dhu is in charge. He is responsible for death, sleep, hibernation and taking away things that are old. He is often compared to or has correspondences with the Devil and Odin and his wild hunt who escort the souls of the dead to the underworld. In the complete phase there is the complete Bucca who is androgynous with characteristics of both male and female. He encompasses all.
- http://granovitch.blogspot.com/2012/01/cornish-witchcraft.html

Horned God Ritual oil comes in a 10 ml roller bottle. If there is a sample of something from the shop that you would like to try
along with your order, please let me know at the time of your order.


While I stand by my work and believe plants and oils are imbued with Magic simply by the nature of their existence, I must tell you that this information is for curio purposes only.