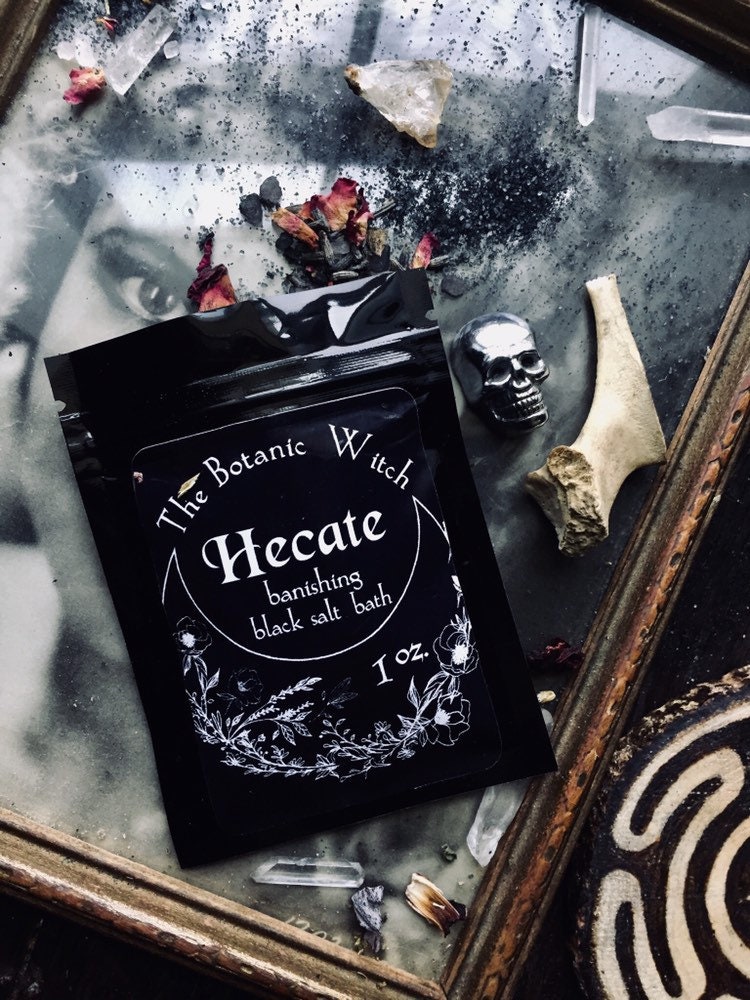 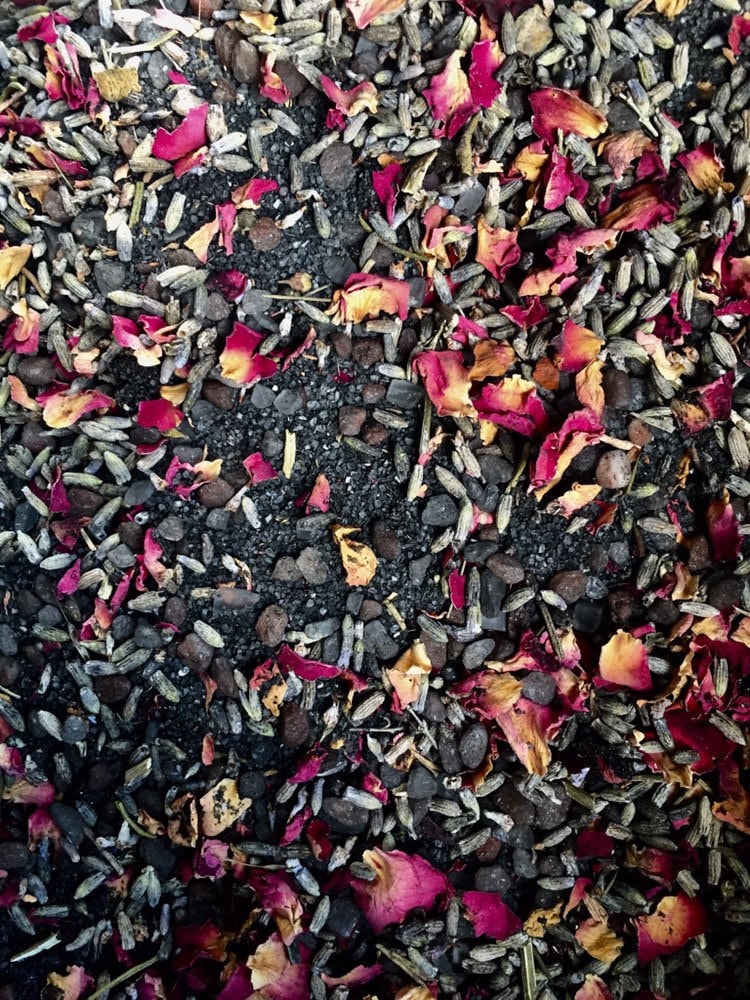 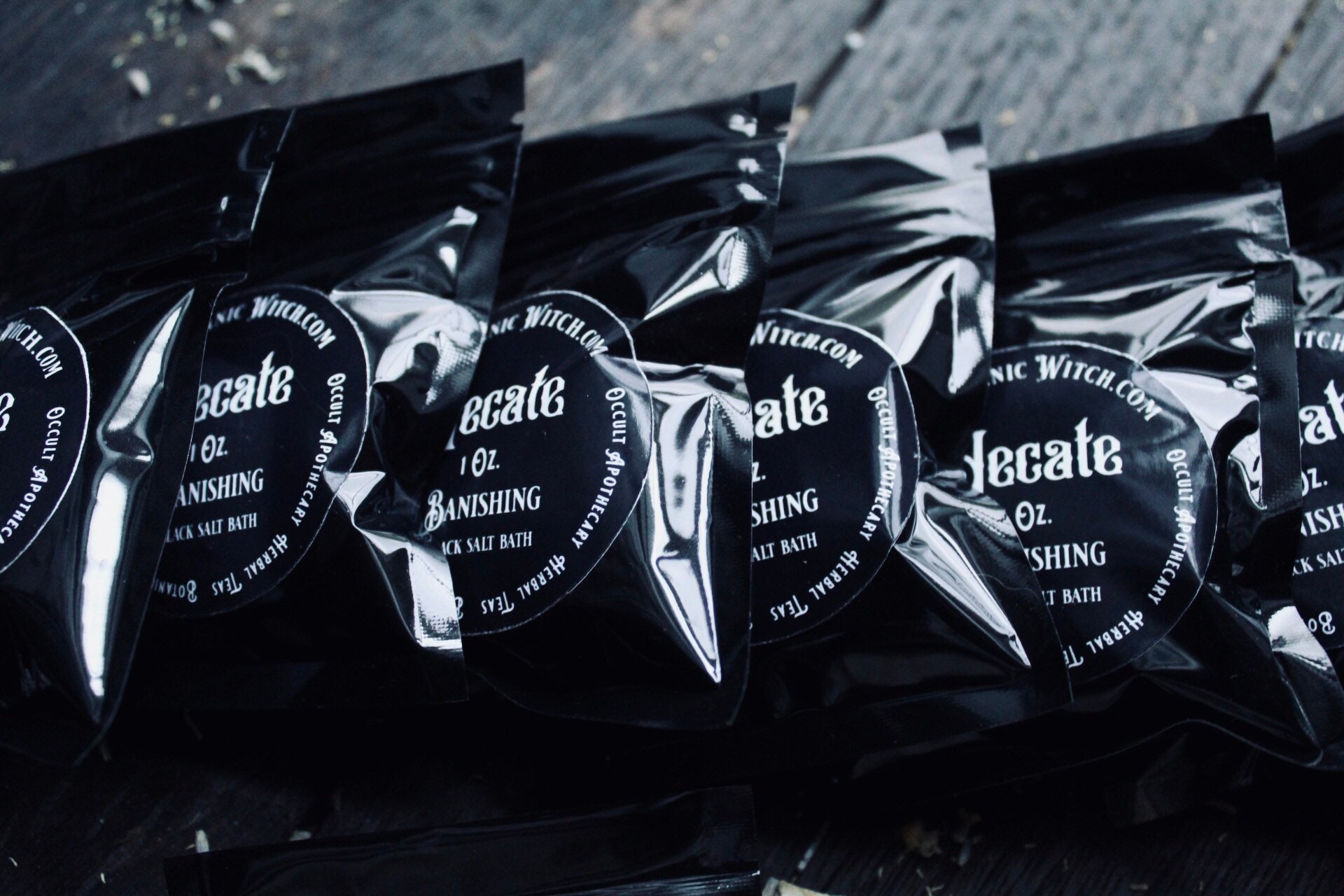 Hecate is a black salt ritual bath for Dark Moon banishing work. Made with black lava salt, herbs and oils traditionally associated with the Dark Goddess, it carries heavy notes of Cypress. Activated charcoal purifies both the skin and spirit.


While banishing spells can be performed at any time, they are most effective if performed while the moon is waning. Saturday is a good day for general banishing spells. The best time is at the dark of the Moon,before the New Moon appears.

For many modern witchcraft traditions, Hecate is a Dark Goddess associated with the Spirits of the Dead, Ghosts, the Dark of the Moon, baneful herbs, curses, and Black Magic.
For others, Hecate is the Crone Goddess, ruling over the third stage of a woman's life, that beyond her childbearing years when she can focus on deepening the skills and information collected throughout her lifetime, when knowledge and experience is refined into wisdom. Historically, Hecate has served many roles. She is an incredibly ancient Goddess with origins lost in the mists of time.


Hecate would appear to have been originally a Moon-goddess worshipped by the Thracians. She became confounded, and eventually identified with Selene and Persephone, and is one of those divinities of whom the ancients had various conflicting accounts.

Hecate was the daughter of Perses and "gold-wreathed" Astræa (the starry night), and her sway extended over earth, Heaven and Hell, for which reason she is represented in works of art as a triple divinity, having three female bodies, all young and beautiful, and united together.

In later times, when this divinity becomes identified with Persephone, she is supposed to inhabit the lower world as a malignant deity, and henceforward it is the gloomy, awe-inspiring side of her character which alone develops itself. She now presides over all practices connected with Witchcraft and enchantments, haunts sepulchres, and the point where two roads cross, and lonely spots where murders have been committed. She was supposed to be connected with the appearance of ghosts and spectres, to possess unlimited influence over the powers of the lower world, and to be able to lay to rest unearthly apparitions by her magic spells and incantations.

Hecate appears as a gigantic woman, bearing a torch and a sword. Her feet and hair are formed of snakes, and her passage is accompanied by voices of thunder, weird shrieks and yells, and the deep baying and howling of dogs.

Her favour was propitiated by offerings and sacrifices, principally consisting of black lambs. Her festivals were celebrated at night, by torchlight, when these animals were offered to her, accompanied by many peculiar ceremonies. These ceremonies were carried out with the minutest attention to details, as it was believed that the omission of the slightest particular would afford to her ministers, the evil spirits of the lower world, who hovered round the worshippers, an opportunity for entering among them, and exerting their baneful influence. At the end of every month food was placed wherever two roads met, in readiness for her and other malignant divinities.

Witchcraft info for Curio purposes only.

This salt bath may require some rinsing of your tub after your bath. I recommend waiting until your ritual is complete and you are settled. It should wipe away easily with water and cloth, or what you normally use to clean with. Dish liquid is excellent for breaking up oils if you should find it difficult to remove. Charcoal and salt should not harm your tub. No artificial dyes have been added to this bath.