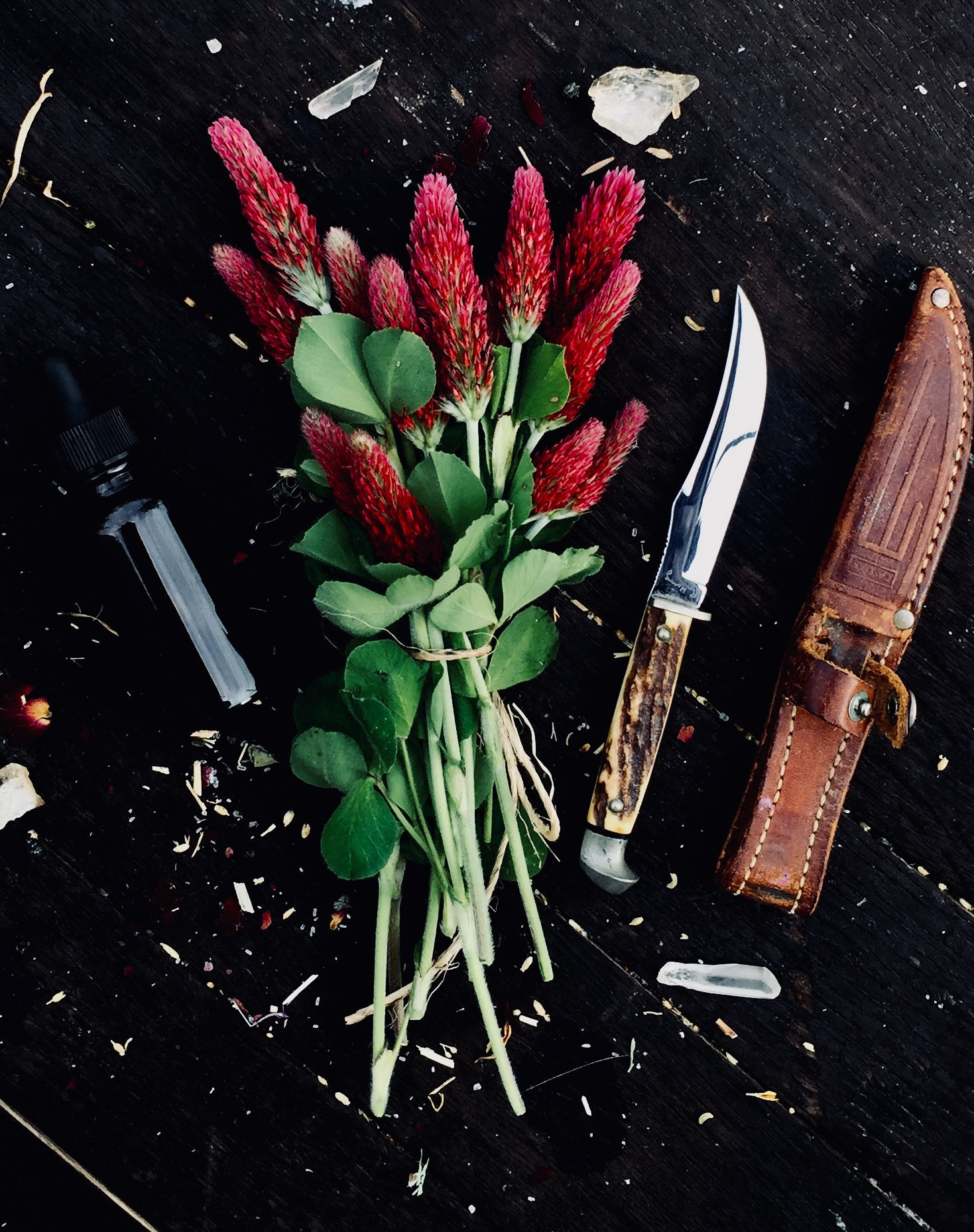 I was very happy to see the heirloom Trifolium incarnatum or crimson clover I planted last season return to my garden. The long, blood-red buds of this variety of clover are visually appealing to me and have fairy tale aesthetic about them as if you might come across their blossoms scattered in an enchanted meadow or forest. The name incarnatum itself means “blood red”. I planted them for their looks and to help enrich our soil as a cover crop (more on that below) in one of our small flower beds. It’s gorgeous, offers nutrients like phosphorus, calcium, and magnesium. It also makes a nice tea or addition to lemonade. But it isn’t the same medicinally as the pink variety, Trifolium pratense beginning to decorate the open fields in my region this time of year.

Trifolium pratense or red clover was highly esteemed by the Greeks, Celts, Romans, and the Druids, who believed the blossoms could ward off curses, and evil spirits. It is associated with luck to this day. In witchcraft, it is a visionary herb. Folklore tells to dream of clover predicts a happy marriage and the plant itself can aid in love divination. A four-leafed clover enables its holder to see Fae and assists with gaining second sight.

In Witchcraft it is associated with money, love, protection, fidelity, exorcism, and uncrossing, unhexing, and success. Red clover is ruled by Mercury, the four elements, and is sacred to Aphrodite, Hathor, Freya, and Venus. Folk names for clover include trifoil, three-leaved grass, shamrock, and honeystalks.

Red clover  is one of the earliest economic plants cultivated in agricultural countries since antiquity and is native to temperate regions of Asia and Europe. It is an herbaceous species of flowering plants in the Fabaceae family. The name Trifolium explains itself, and simply means, “three leaves” This term also relates to the common name, Clover, which stems from "clava", meaning "three-leaved". The Ancients called it Triphyllon. The three leaves were said to correspond to the Triple Goddesses and later to the Trinity in Christianity. The botanical name pratense is Latin for "found in meadows. 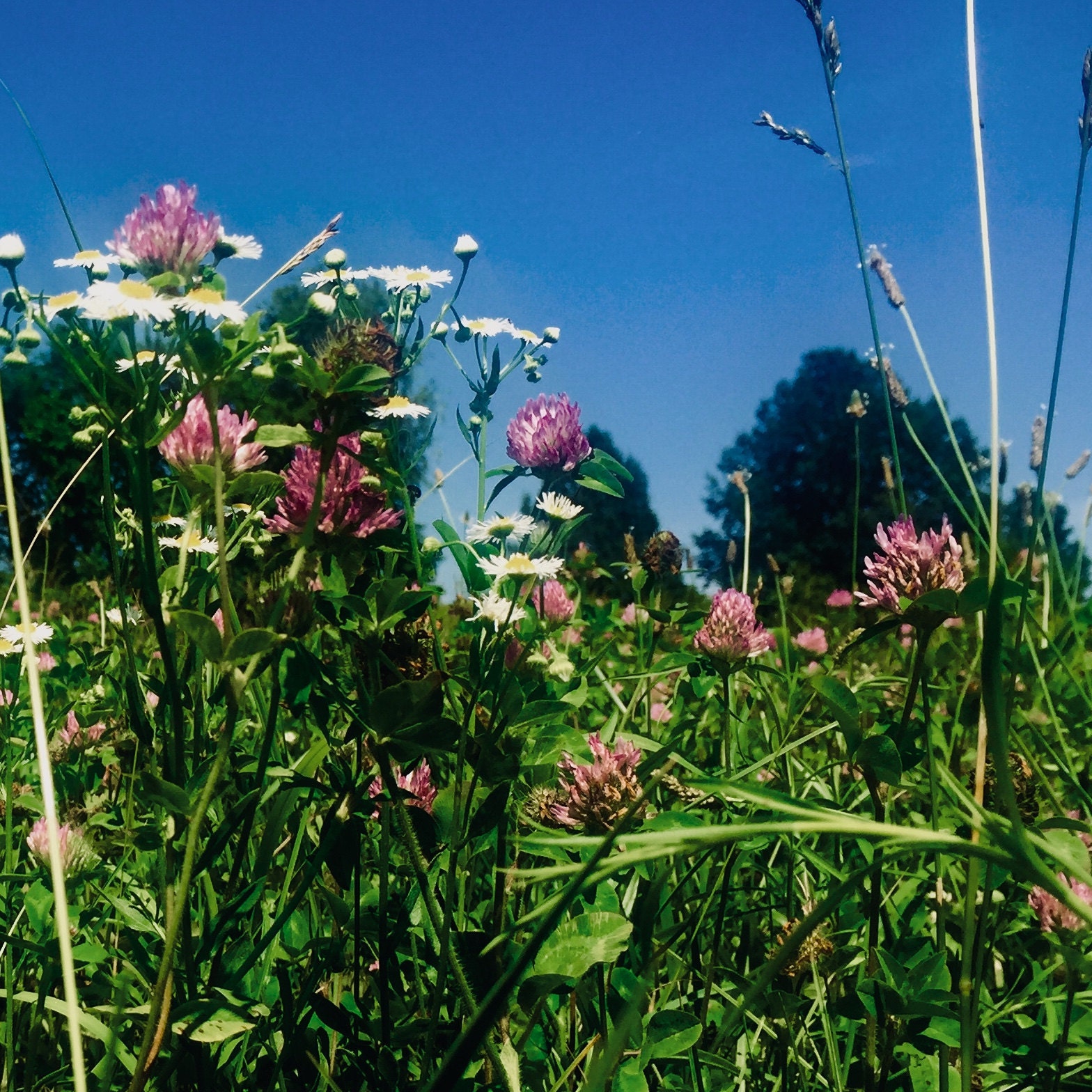 Red clover and  Oxeye daisies in the meadow

Red clover has been an important medicine for over four hundred years. It contains vitamins A, B-Complex, C, F and it also contains the minerals iron, phosphorus, magnesium, calcium, copper, selenium, molybdenum, and tin.

The main constituents of the red clover are flavonoids including salicylates, coumarins, phenolic, glycosides, volatile oils including methyl salicylate, and sitosterol. It has cooling and balancing energetics, anti-inflammatory, lymphatic, phytoestrogen, expectorant, and anti-tumor properties. It affects the blood, liver, heart, and lungs. The blossoms are harvested to make medicines to treat hormone imbalance, tumors, fevers, coughs, cancer, and diseases of the skin. These medicines can be made into an infusion (tea), a tincture, or glycerite. The dried flowers can be infused in oil to craft a salve or lotion to soothe psoriasis, eczema, itching, rashes, insect bites, (the crushed fresh flowers can be applied directly to bites or stings) cracked skin, lymphatic swelling, and other inflammatory skin disorders. I use red clover oil infusion in lip balms, body oils, and moisturizers. A gargle or mouthwash of red clover infusion treats mouth ulcers and sore throats. A major plant ally to for those suffering from PMS or the symptoms of menopause, it can help alleviate hot flashes and prevents loss of bone density.

To forage red clover, look in meadows and hedges and collect the blossoms when they are newly opened. If you’re a little late, I believe that’s still okay. Harvest early in the morning, after the dew dries, but before the heat of the day. Red clover is widely cultivated and can be found in many countries. They are in abundance but please be considerate of animals and pollinators in your area and don’t take all from one place. 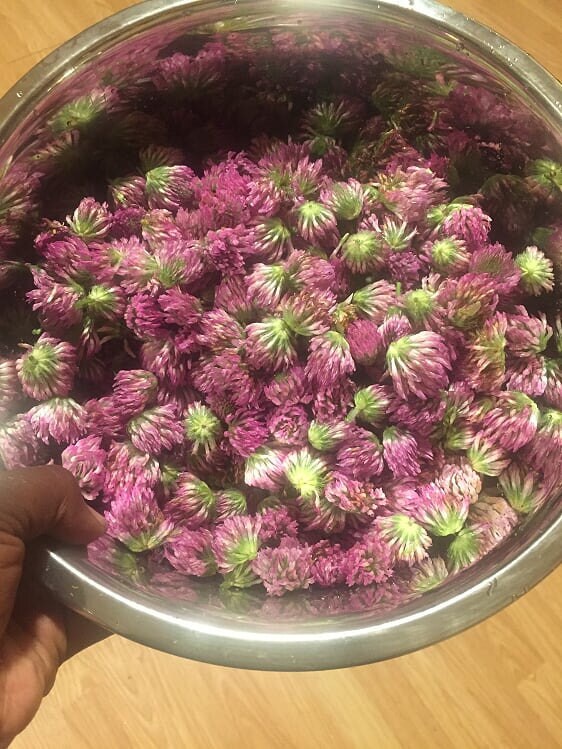 If you would like to grow your own red clover sow seeds where Summer temperatures are moderate throughout the growing period. Scatter where you would like them to grow in late Winter or early Spring and dust with compost. Both Trifolium pratense and Trifolium incarnatum can be planted as a green manure crop in your garden bed. A green manure crop is grown to be dug back into the soil to improve the structure, release nutrients, protect from heavy rain, erosion, and to kill off weeds. We have planted green manure crops in the past. But we are working on no dig as it’s much better for our ecosystem.  In my zone (7) green manure is planted is in August.

To brew a cup of red clover tea, pour 1 cup of boiling water over 3tsp of dried herb. Steep for 15 minutes. My favorite sweetener is raw honey. Use your favorite or whatever you have on hand that tastes good to you.

Want to grow red clover? I harvest mine wild but if you aren't able to do that, or woud just like to grow your own, I order most of my medicinal herb seeds here:

Want to grow crimson clover? Remember they’re very pretty, are nutritious, and add nutrients to the soil, but they don’t carry the same medicinal properties as red clover.   https://www.botanicalinterests.com/product/Crimson-Clover-Cover-Crop-Seeds I am not affiliated in any way with either of the above seed companies. But I have been a long time customer and have had plenty of success with both!

All photos are my own.

The Folklore and Symbolism of Flowers, Plants, and Trees by Ernst and Johanna Lehner

The Kitchen Garden by Alan Buckingham

Discovering the Folklore of Plants by Margaret Baker