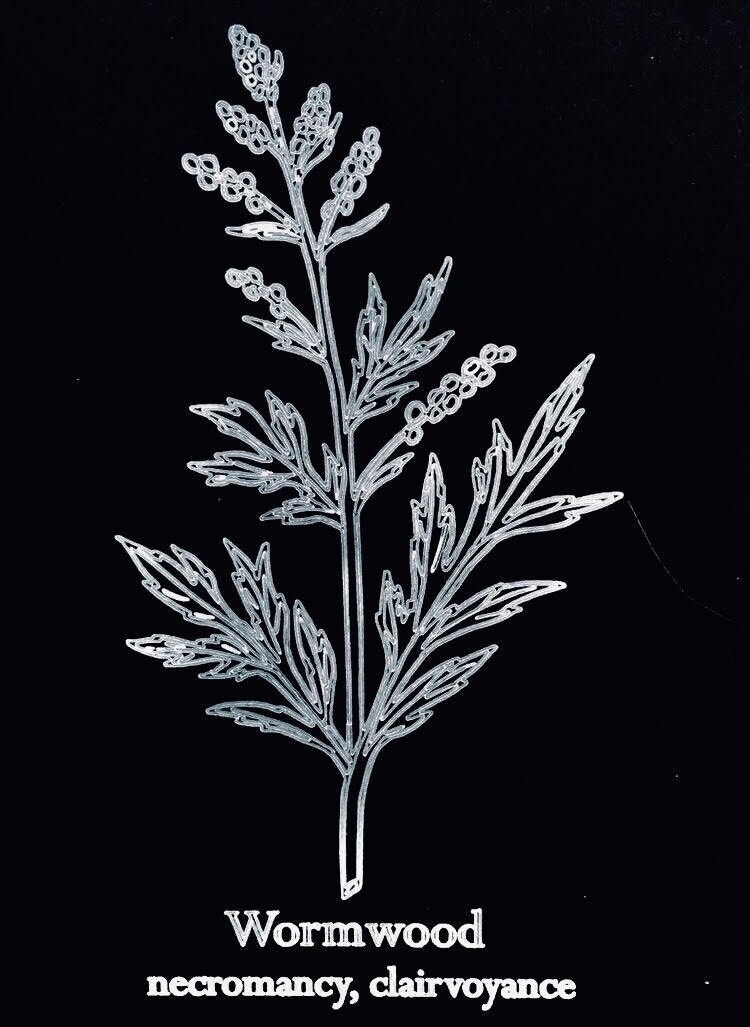 As part of the Plant Spirit Ally Challenge hosted by Hagstone Publishing and Bush Hippies, I have been called write about the lore surrounding my Ally, Wormwood.

“Absinthe is the aphrodisiac of the self. The green fairy who lives in the absinthe wants your soul. But you are safe with me.”

In 1992 I sat wide-eyed in a dark theater as I watched Dracula charm Mina Harker with the best, or worst pick up line I’d ever heard. I didn’t remember that being in the book, but I needed to know more about “The Green Fairy” in the Absinthe. Wormwood at the time was banned in the United States. That made me all the more interested. Because what can be more tempting than what they don’t want us to have?  Especially at sixteen. Wormwood or Artemisia absinthium became a bit of an obsession. Time passed, regulations changed, I finally tried real absinthe and hated it. But I never stopped thinking of wormwood. The name alone evokes feelings of dark, heavily wooded places and Faery Tale Witches who may offer things I should not accept, but probably would anyway…

Wormwood’s leaves are greenish gray on the surface and pale as the Moon on their underside. They contain camphor, a cooling Moon herb. Yet it is said to be of Mars and fire.  Folk names for wormwood include Old Woman, Absinthe, Crown for a King, Madderwort, and Wormot. In the Greek Magical Papyri, it is designated by the code phrase, “Blood of Hephaestus”, the Greek god of the forge and metalworking. Culpeper’s Herbal tells of wormwood growing around forges and ironworks due to the association with fire and Mars, who rules over war, blood and is of elemental fire. Though it has a strong connection to heat, one of my most used and trusted herbalism books “The Modern Herbal Dispensatory” lists it as having “cooling energetics” and I agree that it does since its oil takes the swelling out of my overworked hands and wrists. It is my own thought that Wormwood is both cooling Moon as well as the element of Fire. Making it one of my most powerful Plant Allies in easing physical discomfort and banishing spiritual pests. The name tells us that it is a vermifuge and it has been used in that way for the ages. In 1557 Tusser wrote:

“While wormwood hath seed get a handful or twain,

To save against March, to make flea to refrain,

Where chamber is sweeped and wormwood is strowne

What saw is better if psychic be true,

For places infected than wormwood and rue.”

It has been my experience that an herb’s mundane uses can tell us a lot about what they might be effective for magically. Burning wormwood as an incense, using it as a floor wash, or mixing it powdered with a purifying oil like Myrrh for can remove Otherworldly vermin just as it can control other types of pests.

Wormwood helps thin the veil between our world and the Otherworld and according to the Greek Magical Papyri is an ingredient in an ink used to draw an image of Besa, or Bes. Bes is an ancient Egyptian dwarf god, demonic fighter, the god of war, and patron of childbirth and the home. His image was drawn on the hand before sleep to petition the god to answer questions in dreams. Wormwood has been especially effective for me in dreamwork. Dream pillows, tea, inks, and smoke have all been effective. Wormwood is heavily associated with death and the Underworld. It was used in the embalming process in ancient times, and according to old grimoires, if burned in a cemetery, the dead will rise and speak. I believe sleep and death are cousins and so it makes perfect sense ancient peoples called upon the herb to aid in both journeys."The Witching Herbs" by Harold Roth and a leaf from one of my wormwood babies that snapped off after a hard rain.

Wormwood has been burned for centuries to aid in psychic development and is also worn for this purpose. It is said to protect one from a sea serpent’s bite. In ancient traditions, it counteracts hemlock and toadstool poisoning. Though I would just take the person to the nearest hospital if at all possible. I’m not condoning this. 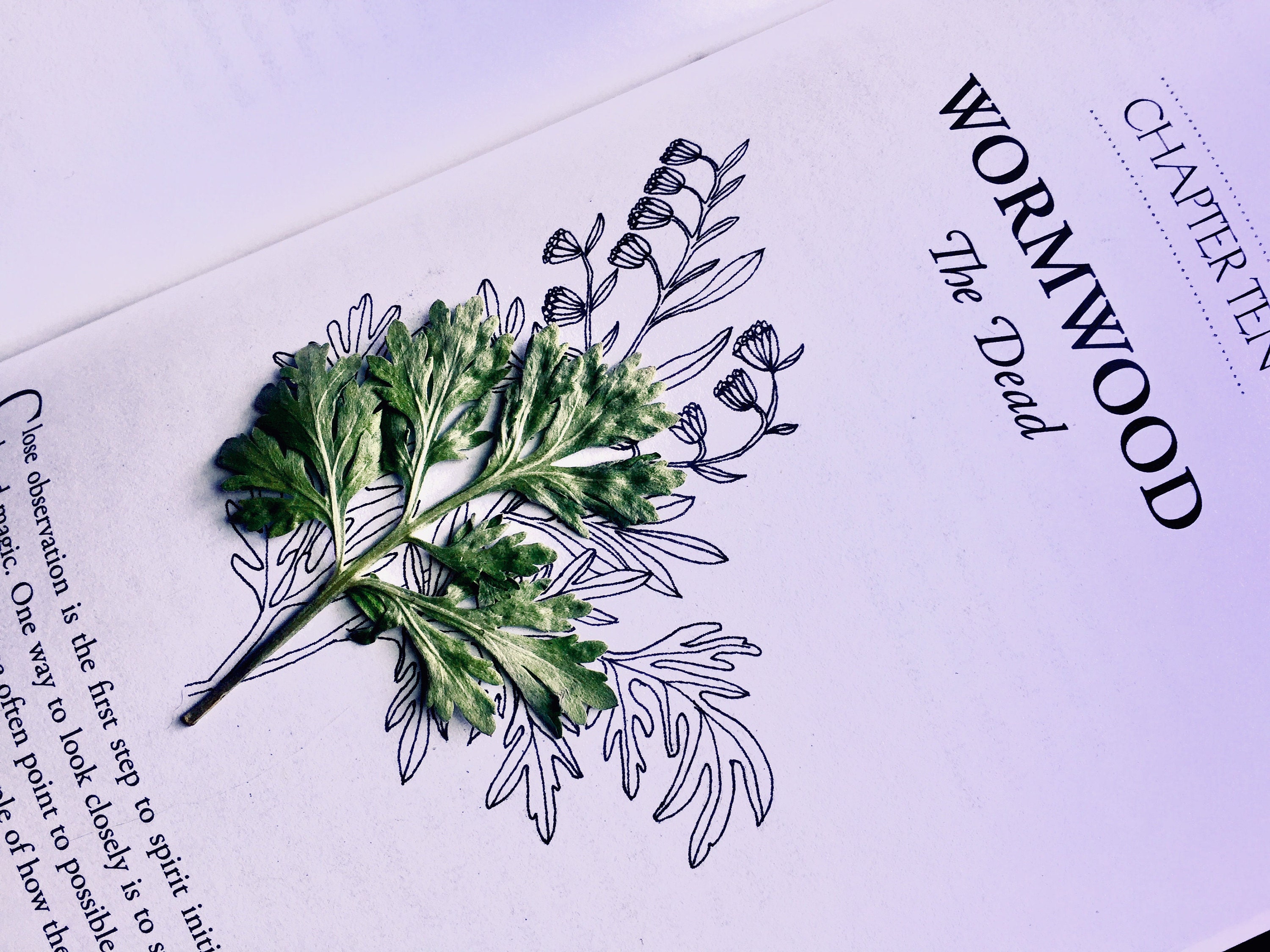 Artemisia absinthium is sacred to the Moon Goddesses Artemis and Diana. In Apuleius’s Herbarium, wormwood is said to have been a gift of Diana.

Of these worts that we name Artemisia, it is said that Diana did find them and delivered their powers to Chiron the Centaur, who first from these Worts set forth a leechdom, and he named these worts from the name of Diana, Artemis, that is Artemisias.

This is another reason I can’t manage to completely disconnect this plant from the Moon no matter what my mentors have said.

In Witchcraft Wormwood is used in banishing, calling Spirits, clairvoyance, divination, love, protection, women’s ­­­rights, scrying, and growth. It can also be used in spells to exact revenge.

In Russian lore wormwood is associated with serpents, especially their queen, who bestows the power of speech and the uses of plants. It has also been said that wormwood first grew from the path of the serpent as it exited the Garden of Eden. Wormwood is mentioned in the New Testament, in the Book of Revelation (ch. 8, vv. 10-11). "The third angel sounded his trumpet, and a great star, blazing like a torch, fell from the sky on a third of the rivers and on the springs of water— the name of the star is Wormwood. A third of the waters turned bitter, and many people died from the waters that had become bitter." (Rev 8:10–11)

Wormwood isn’t only about connecting with spirits or protection; it is also considered a powerful aphrodisiac ( I can confirm this personally though I don’t believe anything works for everyone) and is offered in the gift shop at the Museum of Sex in NYC. An English love potion from the 1400s is made from the left finger of a man freshly hung and still swinging from the gallows cut up and mixed with wormwood. (Can’t confirm if this works…)

As a safety measure it is said by some that wormwood should not be consumed by anyone ever. I feel this is a matter of knowledge of the herb and personal choice. But it is a very strong herb and thujone is toxic. Use caution. It should never be used by pregnant women, nursing mothers, or those who are weak. It should not be taken for more than a month without a break. It is also brutally bitter if you should try the tea. I like it. But I like all sorts of things that taste horrible to others. Of course, you don’t have to consume an herb to bond with it. 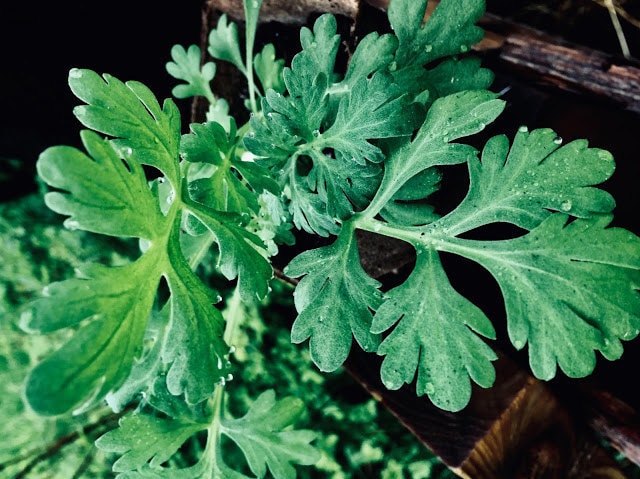 I find resources on folklore all around. While I have a few books that are dedicated only to lore I find it in odd places and all over the web and in random reading. Herbs are mentioned a lot in historical fiction as well and though it's not always accurate, it can inspire one to hit up Google at the very least. I wanted to learn about wormwood after watching a film after all. Mythology and reading folk tales from many cultures has helped a lot as well. All cultures have stories about plants. Many of the names of plants and flowers have roots in myth. The story of Minthe who was turned into a Mint plant via a beating by Persephone is one favorite. The lines between magic and folklore are blurred due to the fact a lot of what we as Witches believe and have experienced as truth are listed as lore by scholars who aren't necessarily practitioners of the Craft.

I’m honored to have been invited to participate in the  Plant Spirit Challenge  though planting and other work has left me with not enough time to participate as much as I would like.

Check out the what my co-hosts came up with for their Plant Ally by clicking the link. Lovely work by everyone!

Discovering the Folklore of Plants by Margaret Baker

The Witching Herbs: 13 Essential Plants for Your Magical Garden by Harold Roth

Thirteen Pathways of Occult Herbalism by Daniel A. Schulke